Send a set of between six and eight high-quality photographic prints on the theme of the ‘decisive moment’ to your tutor. Street photography is the traditional subject of the decisive moment, but it doesn’t have to be. Landscape may also have a decisive moment of weather, season or time of day. A building may have a decisive moment when human activity and light combine to present a ‘peak’ visual moment. You may choose to create imagery that supports the tradition of the ‘decisive moment’, or you may choose to question or invert the concept. Your aim isn’t to tell a story, but in order to work naturally as a series there should be a linking theme, whether it’s a location, an event or a particular period of time.

The assignment calls for a series of photographs featuring a decisive moment. There is no requirement to tell a story but the series needs a linking theme. Originally I planned to feature Gunwharf Quays in Portsmouth. However, when my tutor gave me a link to Polly Braden’s ‘London’s Square Mile’ series it reminded me of shots I took during a street photography course in London last month. I had attended the day with the intention of capturing shots for this project but, to be honest, when I reviewed the photographs initially I was disappointed and dismissed them. Seeing Polly Braden’s work, I decided to revisit that group of photographs to see what I could create.

The street photography course, run by Brian Lloyd Duckett, was a full day in London. I used a Fuji X100F set to aperture priority. With a combination of zone and hyperfocal distance focusing I turned it into a ‘point and shoot’ camera as Henri Cartier Bresson must have done with his Leica. With exposure compensation set to slightly underexpose the images we set off for a day attempting to collect decisive moments! In total, I took nearly 600 pictures out of which I’ve got maybe five of some interest to me.

I crouched down in a walkway using a brightly coloured wall as a backdrop and photographed people as they walked past. This image to me is a decisive moment because of the angle of the two men’s trailing legs. 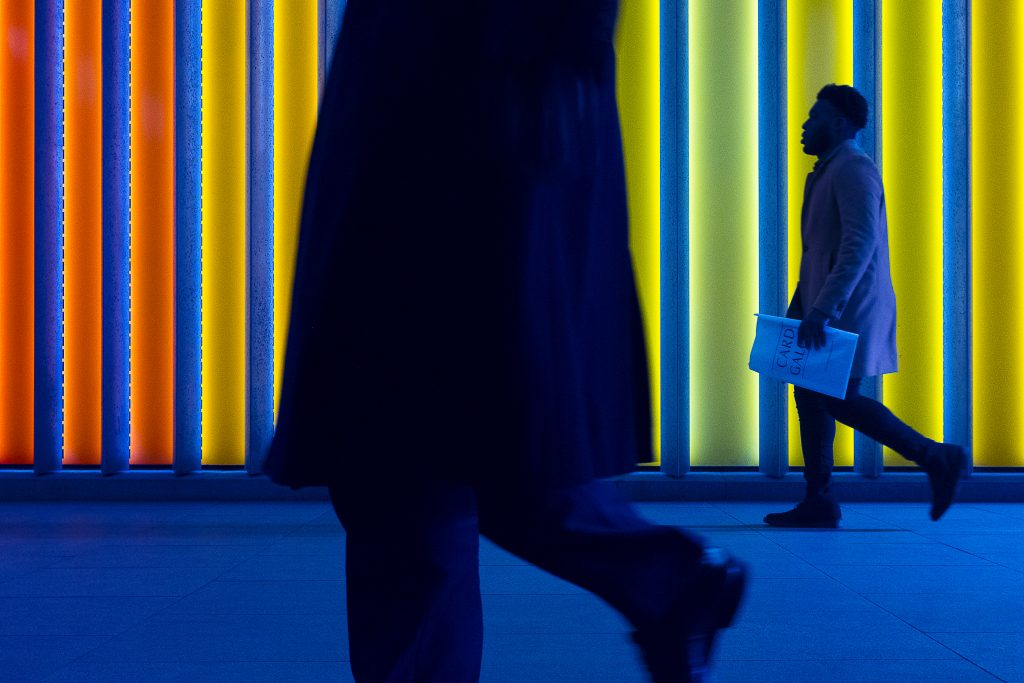 I saw this dapper gentleman standing outside an office in the city. He didn’t seem to want to conform to the non-smoking request. To avoid attracting his attention, I used the technique of taking a photograph of the building above his head and bringing the camera down as if to chimp the image and then took a photograph. Whether that technique worked or he was too involved in texting in any event he didn’t seem to notice me. The decisive moment in this photograph, apart from the fact that he was smoking in a place where he shouldn’t have been smoking, is the angle of his arm holding his cigarette. It mirrors the angle of the cigarette in the signs behind him. 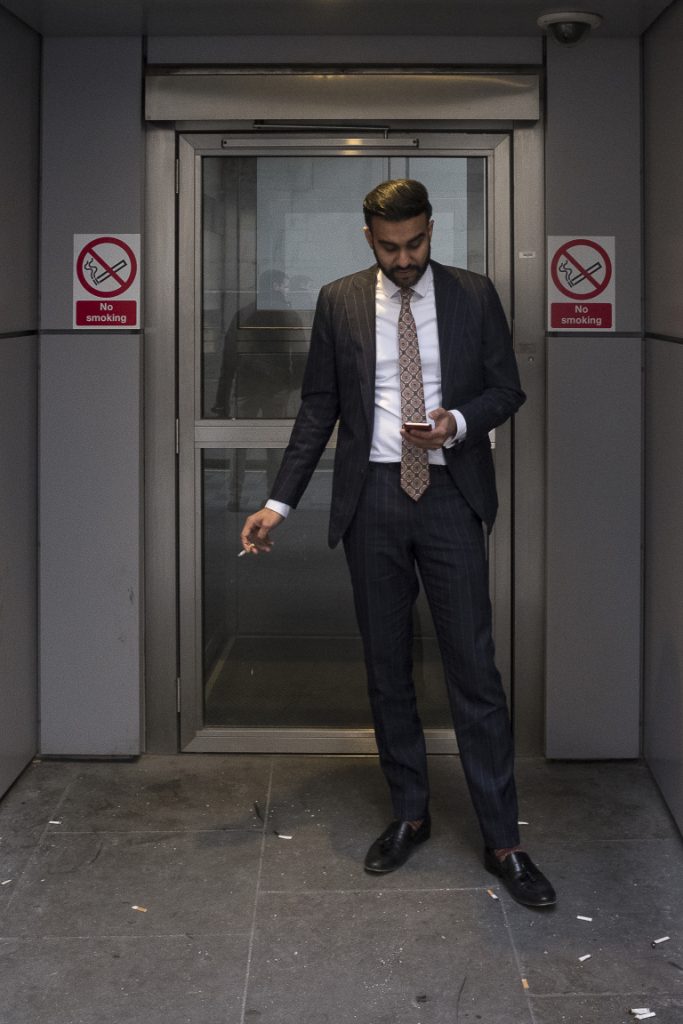 A decisive moment obviously need not only involve a person. It can also involve a building or light. In this case for me the decisive moment is the light briefly shining on the girl. It’s almost as though she is on stage and lit by a spotlight. 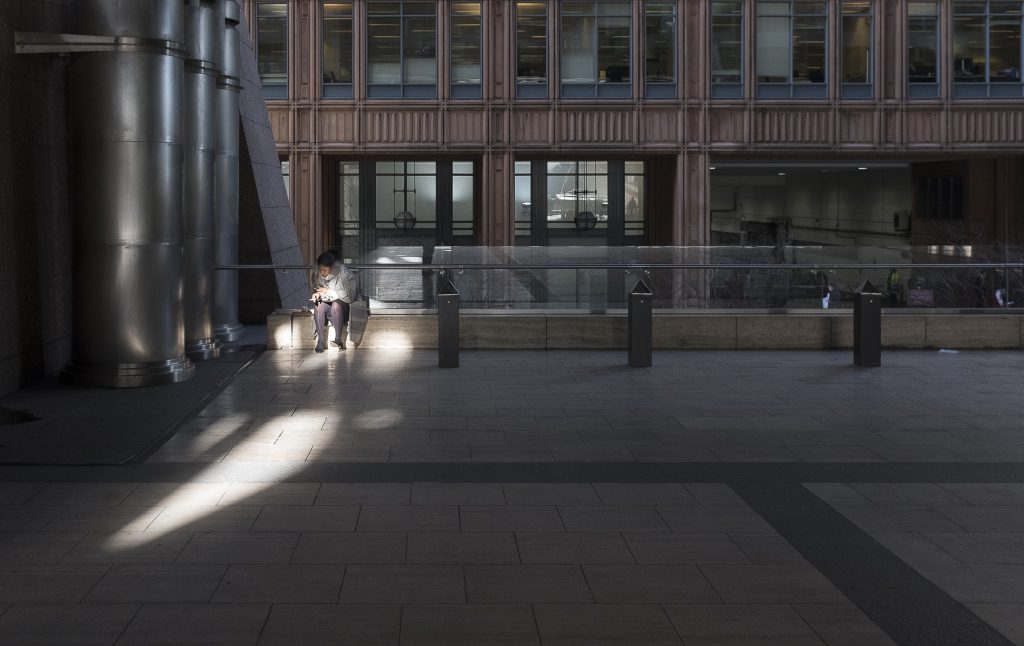 I came across this interesting man on a London bridge. Surrounded by his minders he takes cash from the public by hiding balls in cups. They weren’t too pleased with me when I crouched down to take his photograph. The decisive moment is his reaction to me and the interesting looks I got from the minders! I didn’t stay there too long. 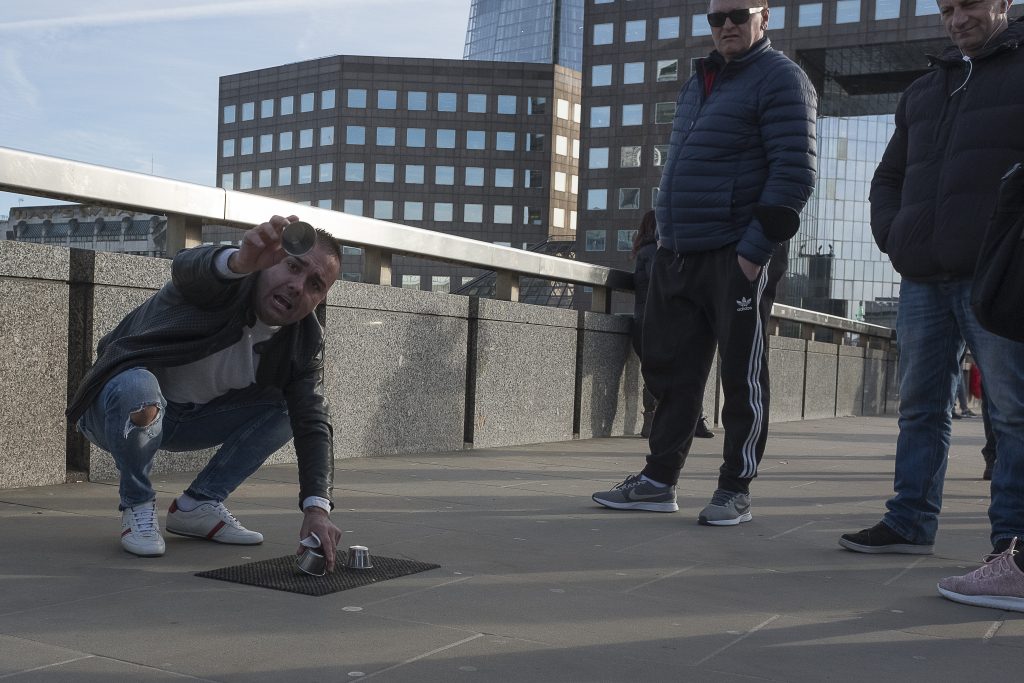 I came across this scene at Borough Market in London. Obviously what attracted me was the contrast between the orange colour of the workmen’s outfits and the soberly clad office workers. To me the decisive moment is the fleeting symmetry between the two groups, the colour contrasts between them and the looks that I got when taking the shot. 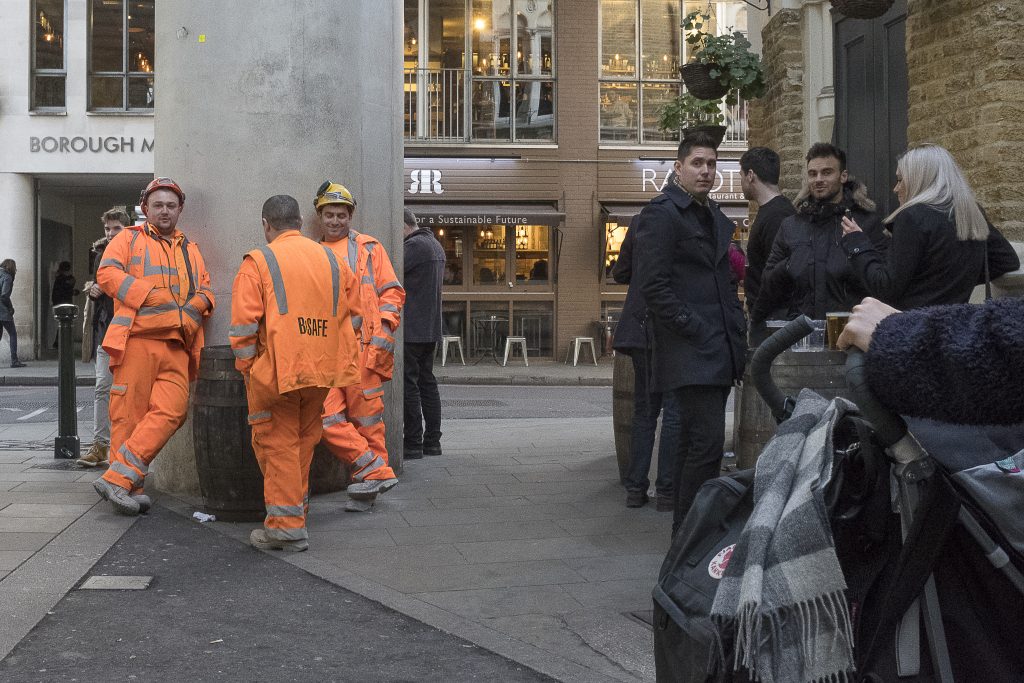 I need to avoid an Australian yellow tape moment and must come clean about this image. It was not taken in London but at Gunwharf Quays a few weeks ago. The photograph is taken on walkway looking down on the passers-by. To me the image is a decisive moment in the sense that the two passersby are well framed in the image. The girl in yellow adds interest and balance to the shot. 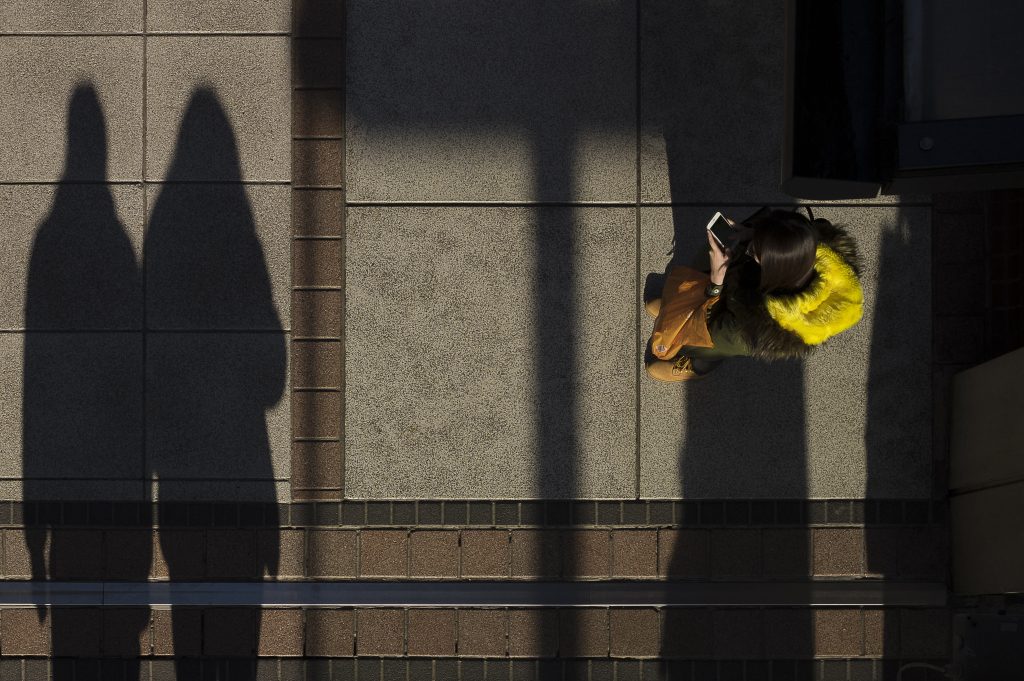