Find examples of news stories where ‘citizen journalism’ has exposed or highlighted abuses of power.  How do these pictures affect the story, if at all? Are these pictures objective?  Can pictures ever be objective?

Tomlinson died as a result of excessive force from a police officer at a protest during the 2009 G20 Conference.  As supported by the first photograph below, Police initially claimed

“The officers took the decision to move him as during this time a number of missiles – believed to be bottles – were being thrown at them.” (Davenport, 2009).

However, in the following days video footage emerged showing Tomlinson being attacked from behind by a Police officer. 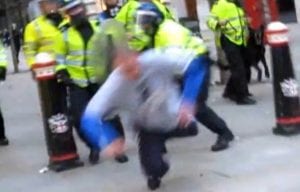 Some four years later Deputy Assistant Commissioner Maxine de Brunner of the Metropolitan Police issued the following statement:  “I apologise unreservedly for Simon Harwood’s use of excessive and unlawful force, which caused Mr Tomlinson’s death, and for the suffering and distress caused to his family as a result.”

Zhang Aihua was a Communist party official in Taizhou City.  As such he was subject to centrally imposed spending limits.

Zhang’s lavish (initially) publicly funded banquet was exposed by a group that burst into the party.  A video of the event, captured by Jia Hongwei, was posted on the Chinese microblogging site, Sina Weibo.  Zhang was sacked a few days later.

Objectivity is defined as the presentation of facts in an unbiased way.

The question posed is whether pictures can ever be objective?  I believe they can in the sense that the photographer is able to decide whether they wish to present a true and fair view of what they have witnessed.  I do acknowledge however that from a viewer’s perspective it is difficult to assess the mindset of the originator.

In the case of the Tomlinson death the relevant context is the external context.  The pictue was published in the Guardian newspaper which, in my opinion, has a reputation for high standard journalism.

In Zhang’s case the relevant context is also the external context, not in the sense of the publication (which was an unmoderated blogging site) but because it was published by Jia Hongwei alongside a video of Zhang begging for foregiveness.  Thereby providing useful corroboration.

Existence of other corroborating images/testimonies

Not capturing the full ‘story’