Look again at Henri Cartier-Bresson’s photograph Behind the Gare Saint-Lazare in Part Three.  Is there a single element in the image that you could say is the pivotal ‘point’ to which the eye returns again and again?  What information does this ‘point’ contain? 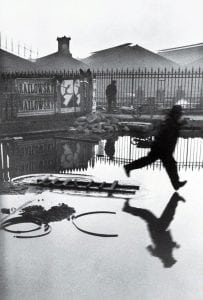 The pivotal point for me is the front foot just about to land in the water.  The information it portrays is energy, movement, confidence, urgency, risk.  It’s as though the subject is flying.

This image was not composed (see below) but was a random event luckily captured.  As such the subject is positioned too far right.  However in this image that adds to the mystery and interest of the shot.  You have no sense of what the guy is running towards.

The part that luck plays

In Part 5 we have been referred to three documentary/street photographers; Henri Cartier-Bresson, Robert Frank and Paul Graham.  In his interview with Graham, Quentin Bajac describes how the world often changes the original ideas that these photographers have.  What has not been mentioned in the context of street photography is the role of luck.

Cartier-Bresson described taking this image by pointing his lens through the hole in a fence and shooting without looking (Cartier-Bresson, 2015).

Robert Frank has a similar experience.  Frank has described the image below as his favourite in his landmark book ‘The Americans’ (Berger, 2015).  But a careful review of the contact sheets reveal that he was in fact originally taking a shot from behind the couple.  It was only that, on being disturbed by Frank, that they turned round in some annoyance.  Furthermore the shot itself was over-exposed and had to be recovered in the darkroom.