Revisit one of the exercises on daylight, artificial light or studio light from Part Four (4.2, 4.3 or 4.4) and prepare it for formal assignment submission:

• Create a set of between six and ten finished images. For the images to work naturally as a series there should be a linking theme, for instance a subject, or a particular period of time.

• Include annotated contact sheets of all of the photographs that you’ve shot for the exercise (see notes on the contact sheet in Part Three).

• Assignment notes are an important part of every assignment. Begin your notes with an introduction outlining why you selected this particular exercise for the assignment, followed by a description of your ‘process’ (the series of steps you took to make the photographs). Reference at least one of the photographers mentioned in Part Four in your assignment notes, showing how their approach to light might link in to your own work. Conclude your notes with a personal reflection on how you’ve developed the exercise in order to meet the descriptors of the Creativity criteria. Write 500–1,000 words.

The exercises contained within EYV Part 4, Language of Light, include daylight shots, night shots, and studio work.  I have no experience of using studio lighting so I had decided some time ago that this would be the basis for this assignment.  I expected to find studio work technically difficult but educational.  I wasn’t disappointed!

During the last call with my tutor we discussed what I might be doing for assignment 4.  I mentioned the work of Wieteke De Kogel which includes a series of images of vegetables lit from inside.

He also suggested that I look at the work of Alexey Kljatov who created a series of images using an interesting light painting technique. 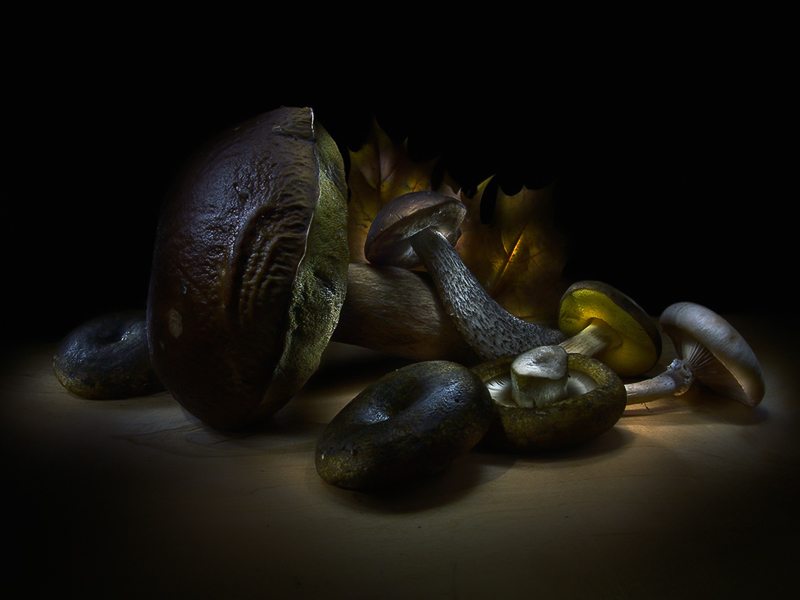 I am not interested in photographing still life and certainly not vegetables but I decided to combine the ideas of De Kogel and Kljatov to photograph slices of fruit.

Specifically the method used combined the ideas of backlighting through an opaque fruit (but not using static lighting – De Kogel) with a light painting technique (but through the fruit rather than above it – Kljatov).

I felt that the different colours and intricate details could combine to work naturally as a linked themed, as required by the brief.

I’ve never been interested in studio photography and have no lighting equipment or a flash.  At this stage I don’t anticipate developing any great interest so I was reluctant to buy any equipment specifically for this assignment. But I relented and visited Poundland. I purchased an LED torch – I’ll let you guess how much I invested.

Having decided I wanted to shoot through slices of different coloured fruits; lemons, oranges, melons etc. I needed a method to hold the fruit slice in place. The only way I could think to do this was to place the sliced fruit onto a clear pain of glass raised from the floor holding the camera on a tripod above the fruit I could then illuminate using my expensive lighting equipment from underneath the glass.  This probably sounds terribly Heath Robinson but I just wanted to see what I could achieve without spending any money at all.

Whilst crawling around my kitchen floor I shot multiple images of each fruit being lit from different angles.  The idea was then to somehow combine them in Photoshop.  If only I’d known what I was letting myself in for…

All shots were taken using a Canon 5DSR with a 100-400mm zoom held on a tripod above the glass. Using the new techniques I’ve learnt to generate the sharpest images, all shots were taken at f14 ISO100 at around 2 seconds using a remote shutter release.

The images were then imported into Lightroom.  For each composite image I selected the minimum number of individual images that would fully light each fruit.  For example here are the four images used to create the final Lemon shot:

Here are my OneNote remarks regarding the creation of the lemon, lime and grapefruit images. 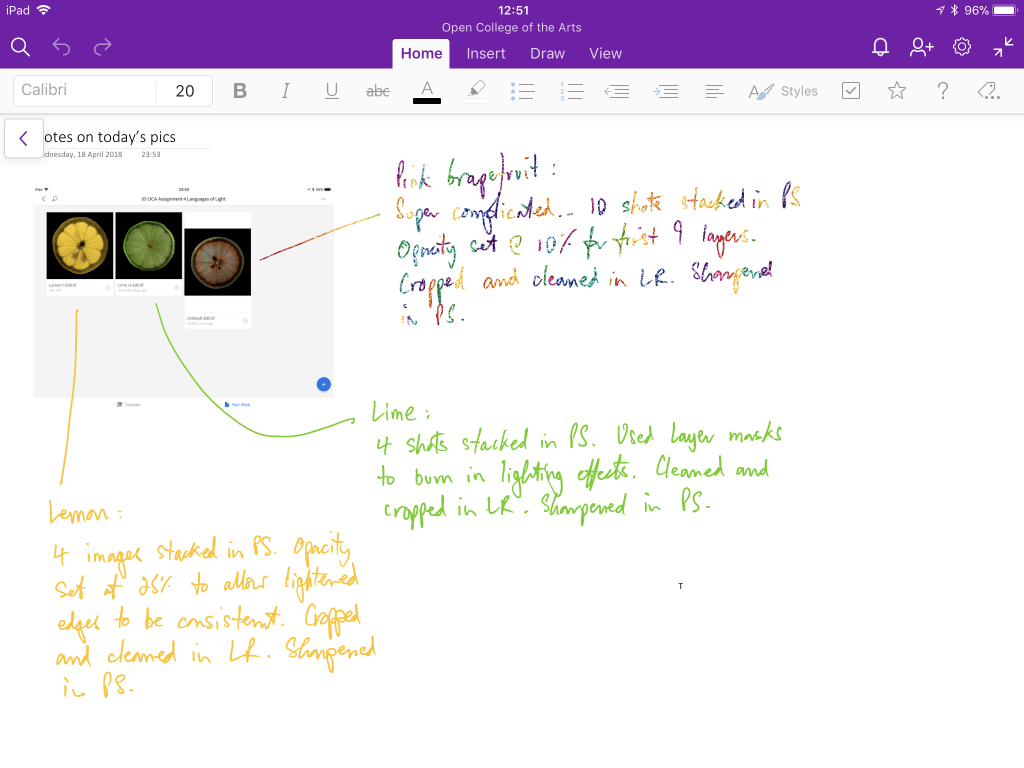 The selected individual images were imported into Photoshop, stacked and then one of two techniques were used to create the composite.  For the lemon and grapefruit composites I reduced the opacity of each image to allow the light areas to become apparent.  For the other images I created layer masks and painted out the dark areas to reveal the light areas contained in the stack.  This proved difficult but a better technique than altering opacities.  The final composite was then cropped and sharpened in Photoshop.

Finally I spent Ages cleaning the images in Lightroom using an adjustment brush.  The resulting images are super clean (to my eyes) but it was a very time consuming process!

The creativity criteria for Level 1 students are imagination, experimentation and invention. These are my personal reflections on how I feel I’ve developed this exercise to achieve those criteria.

Recently, perhaps because of the involvement and enjoyment of this course, I seem to have come up with some interesting (to me) ideas.  Many daft and unachievable of course!  So the idea of subject selection is an interesting conundrum for me right now; I have read and considered it a lot recently.  In particular I have drawn from the ideas of three people.

The subject matter you select must: a) fire your enthusiasm and curiosity for at least the length of time it would take to produce a meaningful body of work; b) lend itself to images as opposed to words and; c) remain continuously accessible so that you can return time again to the same topic when ever you wish for have time (Hurn and Jay, 2009).

There is a secret that real writers know that wanabe writers don’t, and the secret is this: It’s not the writing part that’s hard. What’s hard is sitting down to write (Pressfield, 2002).

I recently came across Brian Eno’s Oblique Strategies cards. The disruptive instruction contained on the card I chose says ‘Remove ambiguities and convert to specifics’.

Basically what I have drawn from these thoughts is to select something of interest, stick to it and do it in a disciplined manner.  Don’t procrastinate.  If it turns out badly it doesn’t matter.

Obviously influenced by the assignment brief and the conversations with my tutor the subject, I chose to photograph a complete cross section of an opaque fruit against a black background using only a cheap torch.  I decided to present the final square images in a 3×3 typological format so I needed consistent lighting and background to draw attention to the structural and colour differences in the fruits.

Many of the images on the web are only part of the fruit presumably because of the difficulties physically supporting it during shooting.  They often seem to be taken with complicated lighting setups.  I wanted to try a more experimental approach using a torch to backlight the whole fruit slice.

So for me the opportunities for experimentation and invention include the lighting techniques used, the physical setup for the shots, the newly learnt techniques for creating sharp images (particularly during long exposures), using the zoom lens in a macro setting and finally the image stacking facilities within Photoshop.

It’s interesting to reflect on Tim Hartford’s TEDTalk entitled ‘How frustration can make us more creative’.  I chose this studio based project to take me out of my comfort zone.  I can certainly say that the physical and technical difficulties encountered during the assignment have forced me to find creative solutions to problems I’ve never had before.  Very interesting and educational.

I have commented throughout this assignment that studio based still life photography isn’t my bag.  Despite that I chose this studio based project because of the technical learning opportunities it offered.  It sustained my interest sufficiently for me to complete it.  However, the intricate post processing requirements are not where my interests lie and would not sustain my creativity in the long term.